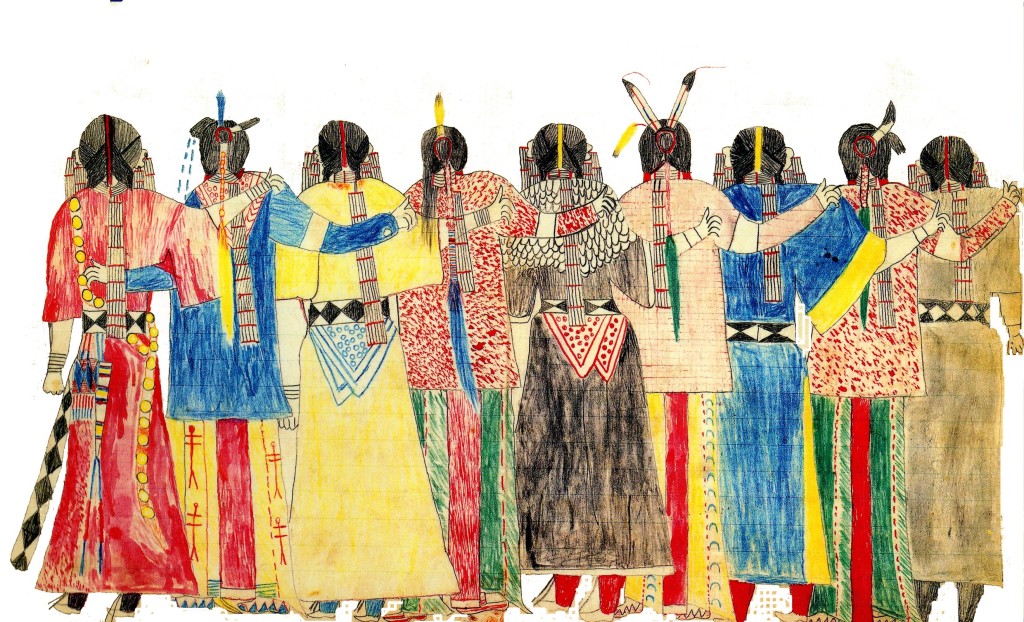 Dyane Sherwood will speak about the symbolic and experiential way that the Lakota (“Sioux”) tribe’s ancient spiritual tradition situates the individual within the natural world and within community. We will look at fundamental symbols and rituals, as well as a story that teaches the value of feminine wisdom. This will be related to the alienation and suffering expressed by many people seeking psychotherapy today, who have lost their orientation and sense of belonging in the natural world and within a community with shared values. The lecture will be followed by a ritual of drumming as a form of active imagination, as practiced by the late Donald Sandner. Wear comfortable clothing and bring drums and rattles so we can celebrate together at the end.

See a slideshow of the workshop on Dyane’s Website

Dyane Sherwood will introduce you to Coyote, who indulges his greedy and lascivious nature and tries to get what he wants through trickery and a disregard for cultural norms. He was a popular figure throughout native peoples in North America, whose stories used outrageous humor to teach us about the Coyote in ourselves and warn us about the Coyote in others.

Each person will have the opportunity to use paper clay, paint, and other art supplies to make your own Coyote figure. We will make the figures in the morning, and then paint and decorate them after lunch. You may also wish to write a story of your own about an encounter with Coyote!

We will end the day by studying a no-longer practiced Navajo story and healing ritual that takes us more deeply into the evil and harm caused by Coyote when his path leads to addiction, abuse, and mental illness.

Note:  Registration is limited to 30 attendees.

Coyote, the Great North American Trickster February 6th, 2017Richard Brodner
Dyane N. Sherwood, Ph.D. did her analytic training at the C. G. Jung Institute of San Francisco, where she was certified in Adult and in Child and Adolescent Analysis. After graduation, she served as Editor of The San Francisco Jung Institute Library Journal (which she re-visioned as Jung Journal: Culture & Psyche), on the Board, as a speaker in public programs, and as a Training Analyst. In 2010, she moved to Oberlin, Ohio, where she has a private practice. She has published book chapters and articles and also co-authored a book with the late Joseph Henderson, MD, Transformation of the Psyche: The Symbolic Alchemy of the Splendor Solis (Routledge, 2003). Website: dyanesherwood.com.
February 17, 2017: Lecture:

Something works behind the veil of fantastic images, whether we give this something a good name or a bad.  It is something real, and for this reason its manifestations must be taken seriously.  -C.G. Jung

Experiential Reflections on the Transcendent Function in Our Lives January 12th, 2017Richard Brodner
Jane Zich, MFA, PhD, is a depth psychotherapist and visual artist who specializes in dialoguing with imagery from the unconscious. Her articles include: “Patterns of Imagery and Tasks During Dialogues with the Unconscious” (Jung Journal, 2011) and “The Role of ‘Orienting Intentions’ in Dialogues with the Unconscious” (Jung Journal, 2008). Her award-winning Vision Journey paintings have been juried into national art exhibitions, published in a number of psychology journals and literary magazines, and can be viewed at www.zichpaintings.com.
March 17, 2017: Lecture:

All of Jungian psychology as we know it – the story of how Jung became Jung – originates in the Red Book. The Red Book is the story of Jung’s confrontation with the unconscious undertaken over the course of 16 years from 1914 – 1930 and expressed in 400 calligraphic pages of writings and 53 full page color paintings. Central to Jung’s reflections in 1912-13 before he began the Red Book, was one main question that became the question of all questions: “What is the myth of my life?” To his great surprise Jung discovered that his myth, the myth of the Red Book, was the alchemical myth.

“I had very soon seen that analytical psychology coincided in a most curious way with alchemy. The experiences of the alchemists were, in a sense, my experiences, and their world was my world. This was, of course, a momentous discovery.”

Many alchemists were not literally trying to turn lead into gold, but were speaking in a language of symbols about the imagination of transformation. This the reason why Jung observed in alchemical texts the same symbols that he experienced in himself and saw in the dreams of his patients. Three of the main themes in alchemy involve the confrontation with the shadow, the return of the repressed feminine, and the relationship between psyche and matter. Connecting these themes is the alchemical mysterium coniunctionis or the union of sun and moon, of the conscious day world with the unconscious night world. In this presentation we will track the original texts and imagery of the alchemists into their reappearance in Jung’s Red Book and, finally, reflect on the meaning and value of the alchemical myth for our lives today in the contemporary world.

View the slides and videos from this event

Jung conceived of alchemy as a practice of what he called active imagination, a meditative practice of transformation in which inner complexes and archetypal constellations are personified or experienced as images and then confronted and related to by the conscious ego. Writing, painting, dance, music and other mediums in addition to unconscious projections onto matter, can all be used to bring the unconscious to conscious expression. Having gone over the theory and history of alchemy in the presentation, in this workshop we will learn how to practice active imagination. Practical recipes taken from alchemy will be introduced and we will provide ample time to apply these recipes to our own experience, not just talking about alchemy but effectively becoming alchemists ourselves. We will also access the way in which Jung saw the value and importance of doing this type of work, politically and culturally, as well as individually.

Alchemical Active Imagination December 28th, 2016Richard Brodner
Thomas Elsner, J.D., M.A. is a Jungian Analyst, certified Psychoanalyst with the California Medical Board, the C.G. Jung Study Center of Southern California, the Inter-Regional Society of Jungian Analysts, and Faculty at Pacifica Graduate Institute. He has taught courses on Depth Psychology and Folklore for over 10 years at Pacifica as well as internationally. Trained as a Jungian Analyst in Zurich, Switzerland, Thomas has been in practice since 1998. Prior to that he worked as an attorney. His upcoming book to be published by Texas A&M in early 2019 is on Coleridge and The Rime of the Ancient Mariner.
April 21, 2017: Lecture:

Jung observed that “life is a short pause between two mysteries.” That fact is not in  debate; what does matter, then, is how we live that short pause. Given that mortality frames our brief journey, how can we live more fully in its presence without being defined by morbidity, fear, and denial? What are the attitudes and practices which enable us to live more fully? And what psychological maturation brings us to experience this short pause as rich with meaning?

Tiny, dependent, and at the mercy of the world around us, we all have to adapt, adjust, bury, deny, split-off and repress, and thereby lose contact with our own sovereignty and natural source of guidance.   The core project of the second half of life is the recovery of that source.   This program/workshop will focus on twenty-one steps we may take toward the recovery of our personal journey.

Taking Your Life Back: Steps to the Recovery of a Personal Journey December 28th, 2016Richard Brodner
James Hollis, Ph. D., is a Zurich-trained Jungian analyst practicing in Washington, D. C., and author of 16 books, the latest being Living an Examined Life and Living Between Worlds: Finding Personal Resilience in Changing Times. Dr. Hollis is former executive director of the Jung Education Center of Houston, professor of Jungian Studies at Saybrook University, and vice president emeritus of the Philemon Foundation. His books include The Eden Project: In Search of the Magical Other,   Finding Meaning in the Second Half of Life, The Middle Passage: From Misery to Meaning in Midlife,  Hauntings: Dispelling the Ghosts who Run our Lives, and What Matters Most.

Due to the uncertainty around covid and in-person attendance, our Fall 2022 and Spring 2023 programs will be presented online. Sign up below to receive the latest updates.
Our physical library is open on Saturdays noon to 3:00pm except on program or holiday weekends. Click here for more information.
Our streaming library of more than 300 Friday Talks is available for members. Click here to view a listing of our streaming lectures.