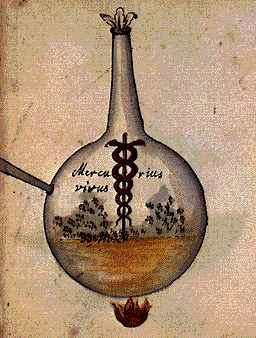 All of Jungian psychology as we know it – the story of how Jung became Jung – originates in the Red Book. The Red Book is the story of Jung’s confrontation with the unconscious undertaken over the course of 16 years from 1914 – 1930 and expressed in 400 calligraphic pages of writings and 53 full page color paintings. Central to Jung’s reflections in 1912-13 before he began the Red Book, was one main question that became the question of all questions: “What is the myth of my life?” To his great surprise Jung discovered that his myth, the myth of the Red Book, was the alchemical myth.

“I had very soon seen that analytical psychology coincided in a most curious way with alchemy. The experiences of the alchemists were, in a sense, my experiences, and their world was my world. This was, of course, a momentous discovery.”

Many alchemists were not literally trying to turn lead into gold, but were speaking in a language of symbols about the imagination of transformation. This the reason why Jung observed in alchemical texts the same symbols that he experienced in himself and saw in the dreams of his patients. Three of the main themes in alchemy involve the confrontation with the shadow, the return of the repressed feminine, and the relationship between psyche and matter. Connecting these themes is the alchemical mysterium coniunctionis or the union of sun and moon, of the conscious day world with the unconscious night world. In this presentation we will track the original texts and imagery of the alchemists into their reappearance in Jung’s Red Book and, finally, reflect on the meaning and value of the alchemical myth for our lives today in the contemporary world.

View the slides and videos from this event

Thomas Elsner, J.D., M.A. is a Jungian Analyst, certified Psychoanalyst with the California Medical Board, the C.G. Jung Study Center of Southern California, the Inter-Regional Society of Jungian Analysts, and Faculty at Pacifica Graduate Institute. He has taught courses on Depth Psychology and Folklore for over 10 years at Pacifica as well as internationally. Trained as a Jungian Analyst in Zurich, Switzerland, Thomas has been in practice since 1998. Prior to that he worked as an attorney. His upcoming book to be published by Texas A&M in early 2019 is on Coleridge and The Rime of the Ancient Mariner.

Date:
March 17, 2017
Time:
7:30 pm - 9:00 pm PDT
We offer Continuing Education Credit through NASW. The fee for CEU credit is for the workshop is $5 for 2 hours. To obtain CEU credit, add the CEU to your shopping cart when registering.